After leaving Uganda, I went to Kenya for a few days to spend time with Cyrus and his family. Cyrus has been working for Hydromissions since 2006. A plumber by trade, Cyrus was the first consultant “hired” to represent Hydromissions. Since he joined, Cyrus scouts potential projects and trains on our behalf, in Kenya mostly. I first met Cyrus when he was my teammate in South Sudan (2011) and we worked together again in Uganda (2012). Cyrus continues to work full time as a plumber since we no longer have many applications or funds going to Kenya, but he still drills for Hydromissions about twice a year. I had never met his family so since I was just in the neighboring country, I just “dropped by” between Uganda and Malawi projects.

*I would love to post a photo of Cyrus and his family, but my phone (which is also my camera) crashed and died a few days ago. I am praying that once I get home, an Apple Store can help retrieve my photos and videos of the past two months of projects.

This was my first time in Malawi and the furthest south (of the equator) I have ever worked!

I am an early bird and since we slept outside, I got used to rising when the sky started to lighten up – which was around 4:30am. Of course, I also was usually in my tent by 8 most nights. The full moon nights really threw me off and I would often wake up around midnight thinking it was morning 🙂

I loved it all – the days were so so so hot (getting up to 112 one day) so sleeping outside was the best way to stay cool (at least from around 2am-5am).

*I have some photos from Malawi that I had given to a friend so she was able to send them back to me after my phone crashed and died. I am updating you all from a wifi hub at the Malawi airport.

My Hydromissions teammate, Jennifer, met me in Malawi and carried over a drill kit since I had given mine to an organization (Africompassiom) in Tanzania. I had also brought over some pieces from Kenya to increase the depth we could drill here. 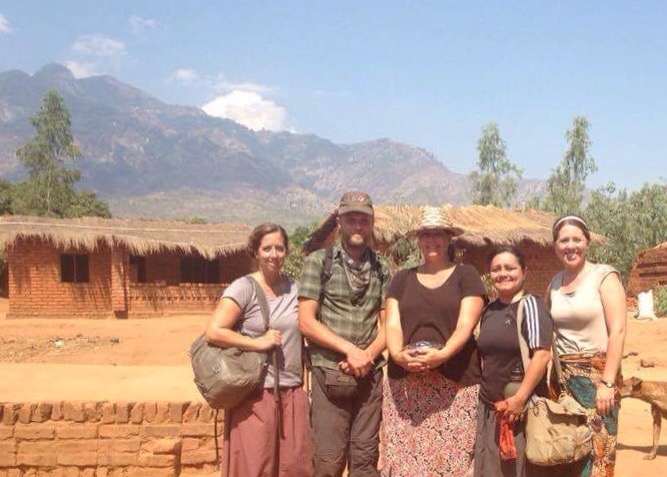 Our primary host was Wendy (center in the photo above), an American who recently moved back to worked in the same village where her parents worked forty years ago. Wendy lived there with her parents when she was very young. It is neat that she had returned and is building a church on the land her family once lived. Wendy is ambitious and fearless- she has faced a lot of challenges and will face many more following her call to minster in Chiduba and surrounding villages. Also with us was a sweet woman named Amy (far right in the photo) who is staying with Wendy to help for six months. Without Amy, we wouldn’t have eaten – she manned the house graciously while the rest of us were in the field. The last member of the group was Ben who arrived shortly before I did. Ben travelled to help Amy and Wendy with solar and everything else they needed to get settled on the land. Ben is staying for 6 weeks total. Ben was a great help with the well drilling and pump building as well so Jennifer and I was happy to have him there at that same time we were working.

I haven’t worked with so many Americans at one time in a few years. It went well. It is important that we focus most on the nationals that we are training in drilling. It helped to have other perspectives and ideas for how we explained certain parts of the process – especially when building the pumps – so it was understood the best by the locals we were training.

We had a four member drilling team – Kwali (brown shirt), Jonas (green pants), Mariello (far right) and Stafford (far left). Kwali and Jonas were pastors from two different villages. Stafford and Mariello were part of the church on Wendy’s land in Chiduba (which Kwali pastored). We had others helping over the course of the project, but those were the four we really focused on with training.

*there is a better group photo at that large Baobab tree which includes Jennifer but it is on her camera so I will update this later when I am stateside to include the whole Hydromissions team.

We had four pieces of land that would serve the community to chose from for the well location. The locations were picked by the Chiefs in the area. Each village has a Chief and then there are levels of Chiefs that govern multiple village Chiefs at a time. We picked a location in Chiduba that seemed central to the area we wanted to serve and also had some surface indicators that water wasn’t far below us.

We started drilling and quickly drilled about ten feet before the challenges started. We started to hit rocks that were most likely from a major landslide that happened in the late nineties. The landscape was littered with huge boulders that were from the landslide. It was a major disaster that basically covered entire villages 20 years ago. We moved the drill a few times because we could tell that we were hitting single rocks and not a layer of bedrock. We progressed between 12′ -16′ in four boreholes before we reached water. In the first borehole that reached water, we couldn’t progress far enough into the water table to keep the borehole open. We are at the end of the dry season and the water table is at the lowest right now. The rains are actually coming anytime now so the farmers are prepping and waiting for the skies to open.

From a training perspective, I am glad we kept hitting rocks before we finally reached water. I want the guys to know to persevere and not give up easily. Of course, there is a balance -I don’t like spending three weeks drilling ninty feet to fail like we did in Uganda. That’s a little too much perserverence 😉

I’ll explain more about the drilling and pump building in the next update – until then – look! We have water! (It’s still dirty in the video because we were cleaning out the dirty water )

I was writing this update as I wait for my flight to leave Malawi. Now I am being called to board – I will update again soon!

2 thoughts on “Drilling in Chiduba (part 1)”

There was an error retrieving images from Instagram. An attempt will be remade in a few minutes.